The Trans Horseman Of The Apocalypse 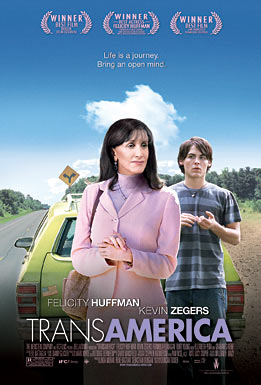 “Somebody told me that they’d read a conservative Christian website where some writer was comparing Transamerica, together with Capote, Brokeback Mountain and Breakfast On Pluto, to the four horsemen of the Apocalypse,” Duncan Tucker laughs. “My reaction to that was, ‘Wow, cool!’ I mean, I don’t want to offend any good, god-fearing people, but I think there are some people out there who are just afraid of anything different.”

We’re discussing the Christian Right’s reaction to his debut feature, Transamerica, one of several high profile and queer-themed films that have been released this season. Compared to earlier films such as The Silence of the Lambs, which demonised transgendered people, Transamerica is definitely different.

Staring Desperate Housewives’ Felicity Huffman in a Golden Globe winning performance, the film depicts a turbulent week in the life of a pre-operative transsexual woman, the prim and conservative Bree Osbourne, as she prepares for her gender-reassignment surgery. Scant days before entering hospital Bree learns that she has a teenage son, Toby, fathered while she was still living as a man, who has been arrested by New York’s finest for prostitution and drug offences. Urged on by her therapist, she flies to the east coast to meet the boy, a surly young hustler played by Kevin Zegers, and in a classic comedy of errors, ends up embarking on a cross-continental road trip with him.

In keeping with the traditions of the road movie, their journey is as much internal as it is geographic. It is a journey which, Tucker says, was partially inspired by Peter Jackson's epic The Lord of the Rings.

“I wanted to make a movie that would really hold me in my seat, and since I couldn’t afford to make The Lord of the Rings, I thought ‘How can I make a film like it on a budget?’ Because just like Peter Jackson’s film this is a quest story. Frodo and my character Bree both have to leave their safe homes and go on a dangerous adventure through uncharted lands, and they make friends and meet enemies, and they come back home changed.”

At the same time, as Tucker was trying to decide what sort of film he wanted to make, a female friend sat him down one night to explain that she was transgendered.

Bree Osbourne, consequently, is not just a memorable transgendered character; she is a memorable character, period. As Duncan Tucker speaks about her, both his words and his tone make it clear just how much he cares about this fictional woman he has created.

“Bree has such great, fragile dignity and nervous determination, and she triumphs. She’s had a hard time but she’s got such guts and heroism. I think when you first see her you see an awkward looking human being, but within five minutes you just start rooting for her, and by the end of the movie you’ve forgotten that she’s awkward looking and she’s just 100% adorable,” the director says proudly.

“I think Felicity Huffman is a brilliant actress, a transformative actress. She disappears into the skin of this character. But as well as I know Felicity now, as friendly as I’ve become with her, I still miss the character that she played. She brought Bree to life and I miss her.”

Posted by richardwatts at 5:36 pm